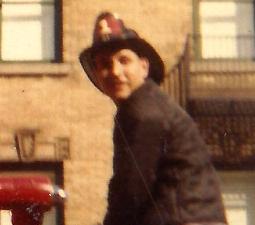 Arthur Kirschner passed away at home on Saturday April 3, 2021.  Artie was born October 16, 1935 to parents Arthur and Mabel and raised in Hoboken, NJ.  Artie was an adventurous, but slightly accident prone youth that enjoyed exploring the Hudson River waterfront and all the back-lots and streets of Hoboken.  He would often share stores of his exploits, most of them ending with a trip to go get stitches.

After graduating from Demarest High School in Hoboken, Artie accepted Uncle Sam’s invitation and he joined the US Army, eventually driving a tank in Korea while serving in the US Armored Corp.

After receiving his Honorable Discharge from the military, he returned to his hometown of Hoboken, where shortly after his return he joined the Hoboken Fire Department; there he found his calling as a firefighter.  During the next twenty five years of hard service, Artie battled some of the worst blazes in Hoboken history.  Even though he found himself in a number of dangerous situations, including those that resulted in injury, Artie had no hesitation about returning to duty because he was confident that he had the skills and experience to get in there and help others.

After twenty five years of hard service, he was able to retire, much to the relief of his wife Eileen who endured many sleepless nights while Artie was on duty.  Artie and Eileen had known each other when they were younger but drifted in different directions after high school.   After returning from the service, Artie worked part-time at the company where Eileen worked.  They reconnected, fell in love and enjoyed the next fifty five years together.

In retirement Artie lived in Bergenfield, NJ and was able to enjoy a number of passions and interests.  He enjoyed working in the garden and tending to his chores around his little suburban house.  He was also a master at baking delicious cookies that were always well received by his family.  He enjoyed decorating the house for the holidays and his spectacular Christmas decorations (both inside and outside) would generate a lot of attention.

He is predeceased by sister Jessie, brother-in law John Hannah and a son from a previous marriage Glen Kirschner.

There has never been a kinder, more caring man than Artie Kirschner; he will be sorely missed by all those whose lives he’s touched.

Viewing is at Riewerts Memorial Home, 187 South Washington Ave, Bergenfield, NJ on Thursday April 8 between 2:00 and 6:00 with a brief service scheduled for 5:30.

In lieu of flowers the family asks that you consider a donation to the Hoboken Exempt Fireman’s Association Relief Fund.

To order memorial trees or send flowers to the family in memory of Arthur R. Kirschner, please visit our flower store.