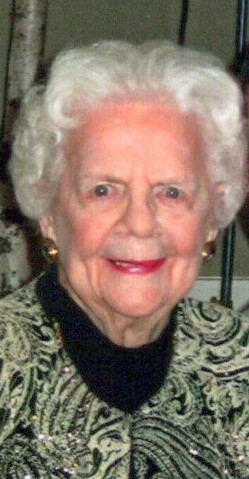 On October 2, 2020, Esther Busund passed away peacefully at the age of 98. Esther was born in Bergenfield, NJ on July 12, 1922, to Frank and Alice Olson.  A devoted church member, Esther met the love of her life, Einar, at a Lutheran youth group event and the couple married in 1947.

Esther was very proud of her job as the administrative assistant to the President of Central National-Gottesman Inc. She worked there for over 20 years, commuting to NYC while raising her children. Esther was happiest surrounded by her loved ones during the holidays, at family BBQs, on vacations in Cape May and Maine, and especially at her summer home that she built with Einar in the Poconos. Esther cared deeply for her friends, family, and neighbors.

Esther was a lifetime member of Trinity Lutheran Church where she was always the first to offer help. She was a Sunday School teacher and a dedicated participant in her Women’s Group throughout the years. An avid reader her whole life, there was nothing Esther liked more than a good book.

Esther was predeceased by her husband, Einar, in 2005, her brothers Bob and George, and her son-in-law, Ben Candela. She is survived by her daughter Barbara Candela and her son Richard Busund and his wife Rosemary, her grandchildren Christine, David, Michael and his wife Anna, Kevin and his wife Katie, her great-grandchild Colt, her sister-in-law, Diane Olson, and many nieces, nephews, cousins, and dear friends.

To order memorial trees or send flowers to the family in memory of Esther O. Busund, please visit our flower store.