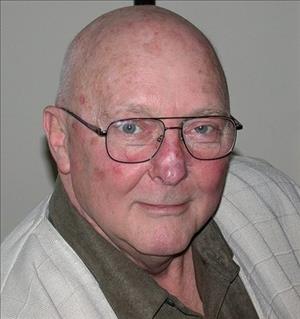 Robert H. Schopper, formerly of Bergenfield, NJ, passed away in the company of his wife, Joan, at their home in Tenafly, NJ on June 16, 2016. Bob was 81 years old. Raised in Ridgewood, Queens, Bob was the second son of Margaret and Oscar Schopper, and younger brother to Arthur Schopper. A United States Army veteran, Bob served in Japan from 1954 to 1956. He then worked as a photographer for American Photograph Corporation, in the computer departments of various banks, and ultimately became an auditor for the IRS. Known for his incredible ability to take naps anywhere, Bob is dearly loved by his family, who will cherish his affinity for big words, his love of cooking and Woodloch Pines, and his skill in the game of Bridge (and lack of skill in the game of Pictionary). Bob was a wealth of mostly-accurate knowledge to his family and friends for many years, and was never afraid to try strange foods (even if it resulted in making the entire house smell for days). His family will remember him through many happy stories and funny memories, and will miss him dearly. Bob is survived by his wife of 55 years, Joan (Hughes) Schopper; his children Teresa (Schopper) Behan and Thomas Schopper; his children-in-law Kevin Behan and Janice (Bookstaver) Schopper; his brother-in-law Peter J. Hughes and sister-in-law Maria (Ferrari) Schopper; his grandsons Brian and Daniel Schopper; and his many friends and family. A wake will be held at Riewerts Memorial Home (187 South Washington Ave. Bergenfield, NJ 07621) on Sunday, June 19th from 2-4 pm and 7-9 pm; a funeral Mass will be held at St. John the Evangelist Church (29 North Washington Ave. Bergenfield, NJ 07621) on Monday, June 20th at 10 am. In lieu of flowers, donations can be made to Friends of Music of the Bergenfield Public Schools (80 South Prospect Ave., Bergenfield, NJ 07621) or to The Barn Theatre (PO Box 102, Montville, NJ 07045).

To order memorial trees or send flowers to the family in memory of Robert H. Schopper, please visit our flower store.