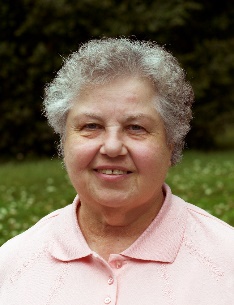 Sr. Carmel Rose was born on October 29,1940, in Syracuse, New York, the fifth of seven children born to Carl and Rosalie Blanco who were both immigrants from Sicily.  Although baptized Antoinette, she was lovingly known as “Tudy” to her family.

In her autobiography, Carmel spoke of growing up in a loving family with the older children helping her father with the younger children after her mother suffered her first heart attack when Carmel was only nine years old.  She attended Our Lady of Pompei, her parish elementary school, which was staffed by our community. When asked at a young age what she wanted to be she responded that she wanted to become a Sister and teach school. She had a special love for St. Francis and had become a member of the Third Order when she was 14. She began praying for a religious vocation and at the age of 18 left home for the Novitiate in Newton, MA. Her decision was accepted and supported by her family.

The next several years were spent teaching in Savannah, Binghamton, and the North End of Boston. In 1978 she was asked to undertake a new ministry as Director of Group Care at the Italian Home for Children in Jamaica Plain, MA.  Following this, she spent time caring for our Sisters in the Infirmary in Tenafly and as a Religious Education teacher in Syracuse. From here, having completed a Pastoral Counseling Program, she moved into the ministry of hospital chaplaincy in the Binghamton and Syracuse areas from 1991-2001. Finally, she served as Pastoral Associate of St. Cecilia’s Parish in Syracuse before moving again to Tenafly.

Carmel was also a pioneer in beginning our Associate Program in Binghamton, and continued to work with Associates in both Syracuse and Tenafly.  She also helped organize programs for all of the Associates in our US Circle.

For many years, Carmel’s health had been deteriorating but this never stopped her from giving herself 100% to everything she did.  She had been on Dialysis for several years and as her health continued to break down, she suffered with infections, had surgeries and her visits to the hospital and re-hab centers became more frequent.  She left the Infirmary on August 14, 2019 and neither she nor any of us realized that it would be her last time leaving.  When she was no longer able to have many visitors, the Sisters continued their support through cards and especially through prayer.  This meant the most to Carmel and she always wanted the Sisters to know that their prayers meant everything to her. While at Atrium Acute Care Center, on February 10, 2020 she had heart difficulties and was taken to Pascack Valley Hospital, since it was closest.  She received excellent care there but remained in the Intensive Care Unit most of the time and finally decided on Sunday, February 29, that she wished to go to Villa Maire Claire Hospice, which is connected with Holy Name Hospital.  Transportation was arranged on Monday and she spent Tuesday in the restful environment of this special place.  Freed from all of the tubes and monitors she slept peacefully most of the day with her faithful brother Carl present, as well as some Sisters and members of our Infirmary staff stopping to visit.  Tuesday evening her sister Terry and two nieces arrived from Syracuse and spent the night with her until she slipped away at 5:25 AM on Wednesday morning.

Those who knew her, remember especially Carmel’s wit and her sense of humor.  Along with these gifts however, was a spiritual depth.  In her autobiography, she noted that Spiritual Direction and CPE played a prominent role in her spiritual development.  As part of her Chaplaincy preparation, she attended workshops and courses dealing with death and bereavement.  She said: “As a pastoral care minister, I have been enriched by the ways in which patients and their families have shared their lives with me by allowing me to be with them in their time of suffering, fear, grief, joy and hope.  They have helped me to become more in touch with the meaning of suffering and death in my own life and the realization that suffering and death are also the sources of new hope and new life, if I am open enough to allow God’s grace to heal and to work within me…I experience pastoral ministry as the expression of my personal relationship with Christ…I try to share my experience of Christ with those to whom I minister and to serve, as best I can, with awareness of my strengths and weaknesses, with gentleness and humility of Christ for all who are burdened and broken with human suffering.”

With love from all of your Tenafly Sisters

To order memorial trees or send flowers to the family in memory of Sr. Carmel Rose Nicita, MFIC, please visit our flower store.