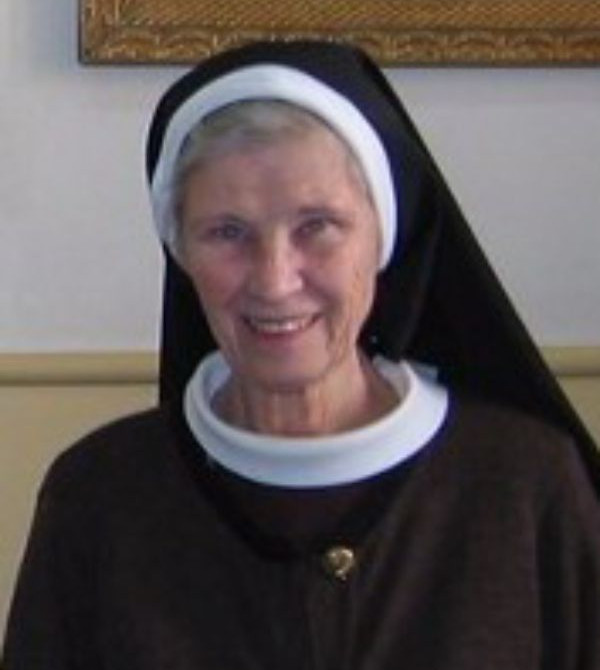 Our beloved Sr. Margaret Mary O’Shea passed away as quietly and as gently as she lived her final years here in Tenafly.  She was one of ten children born to Michael and Margaret Mary Kennedy O’Shea and grew up in a loving, Catholic family on the family farm in Carrick-on-Suir, Co. Tipperary, Ireland.

In her humble way, she left very little in writing about her early life and entered the Missionary Franciscan Sisters in1940 where she received the name Sr. M. Cataldus. She made her First Profession of Vows in 1943 and her Final Profession on August 25, 1948. By that time, she had already begun her ministry as a teacher, serving at schools in the North End of Boston, Chestnut Hill, Syracuse, NY and Milton, MA.  One Sister who lived with her during those years said “I never remember Cataldus without a smile on her face! And her light was on all hours of the night preparing lessons or sewing.”  Another Sister remembered how she shared her artistic ability with other teachers as they prepared their students for Art Contests.

In 1968 she was missioned to Sacred Heart School in Alexandria, Egypt and this was to become a most significant part of her ministry and of her life.  She would spend most of the next 45 years here, where she became a beloved teacher of her pupils.  When her health began to fail, it finally became necessary for her to retire and she came to Our Lady of the Angels Convent in Tenafly, NJ in August 2013.  Even after this move, her past pupils stayed in touch with her and when she was no longer able to communicate for herself, they continued to be in touch with her by email, telephone calls, birthday presents and visits to Tenafly.  They also shared news of Sr. Margaret with each other on Facebook. Just one example of their feelings for her are reflected in the following message: “…I can’t explain enough how much we all miss her and how much we owe her and all the sisters for all that they did for us and their great and precious impact on our lives.”  When pupils telephoned and she could no longer talk on the phone, they asked that the phone would be held to her ear so they could talk to her.  The present principal of Sacred Heart said “…Sr. Margaret was the angel of our school, a blessing and an honor for me to work with her…”  Of the few words written about herself, on the occasion of her Diamond Jubilee as she reflected on her life in Egypt, she said, “I’m delighted to be here.  I’ve worked hard and enjoyed it very much.”

Her family always remained a very important part of her life.  Her nieces, nephews and grandnieces and grandnephews continued to telephone and to visit her from Ireland with the last visit just a few months ago.  They spoke of their great love for her and of their excitement when she was coming home to visit.  Recently, when one of her nephews was told how much she now slept, he said that she must be making up for all of the years that she seemed to require so little sleep! He shared that when on vacation she was the last one up at night and the first up in the morning.  The dedication of her family to their dear Auntie was special and even when she could no longer speak, we could see her recognition of the accent and feel sure that she knew her beloved family members were there when they visited.

Finally, she endeared herself not only to the Sisters in Tenafly but to the Nurses and Caregivers who cared for her so lovingly.  Until the last week of her life, she was able to attend Mass and come to the dining room for meals until she gradually began to weaken and sleep even more.  Her last few days were spent in bed and the Sisters continued to visit her.  On the final day, as her breathing began to change Sisters were with her when she quietly slipped away with no struggle.  The Responsorial Psalm (42) for the day was surely her wish, which was granted that day: “Athirst is my soul for the living God.  When shall I go and behold the face of God?”

Rest in peace dear Margaret, and thank you for the gift you have been to all of us.

To order memorial trees or send flowers to the family in memory of Sr. Margaret O'Shea, please visit our flower store.